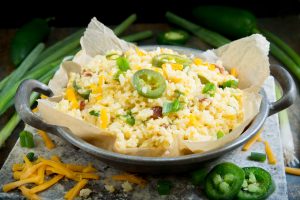 This Keto Cheesy Jalapeño Bacon Cauliflower Grits recipe is the perfect low-carb southern summer dish. This flavorful crowdpleaser is packed with gooey cheese, bacon bits, garlic, and a little pop of jalapeño. This recipe is suitable for those following a low-carb, Keto, Banting, Atkins, or gluten-free diet. 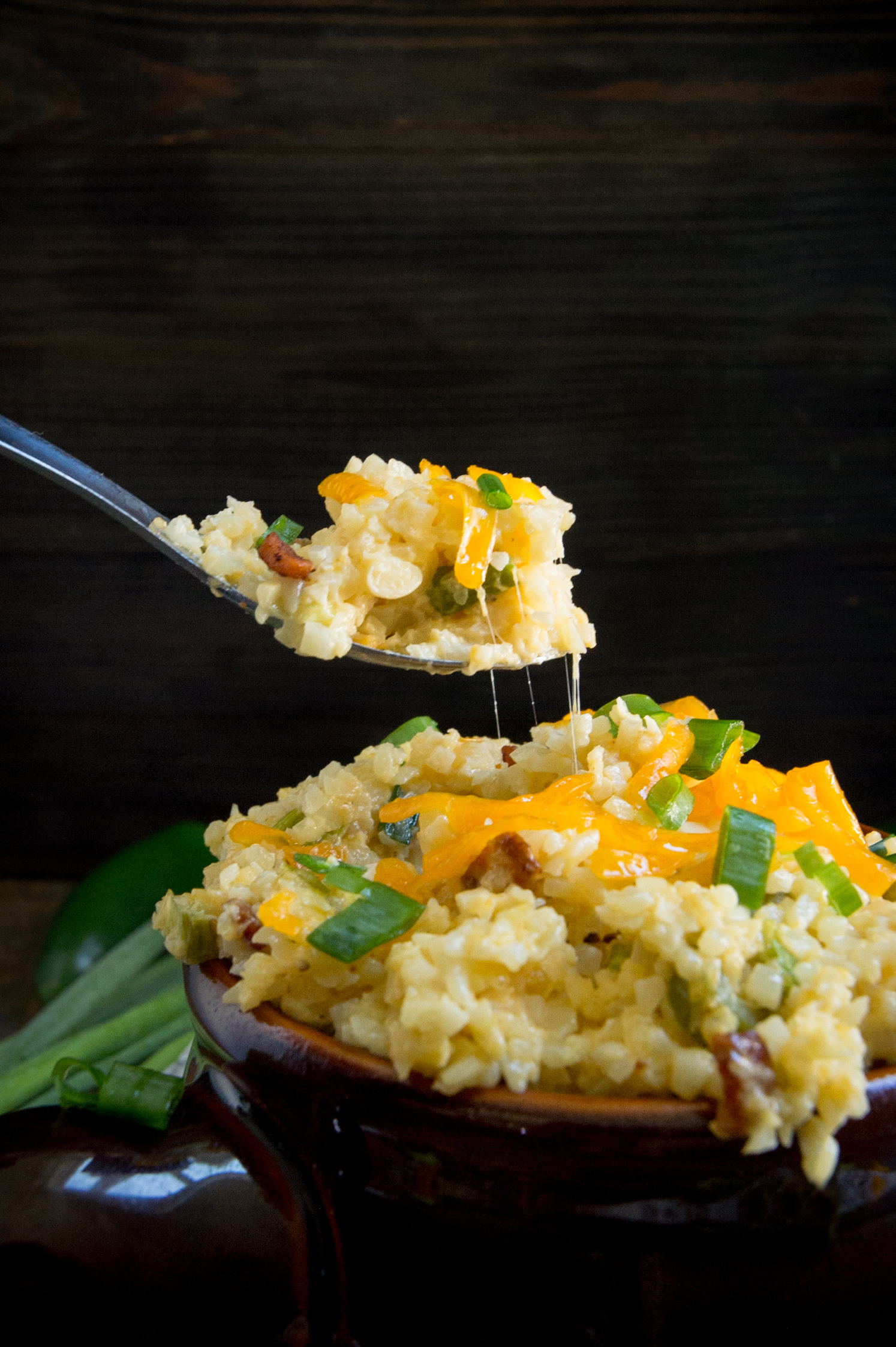 This recipe is heaven in a bite. Each bite is packed with cheesy goodness, bacon bits, green onion, garlic, and a little pop of Jalapeño.

The smoky flavor of the bacon is what makes this dish truly shine. In addition to the bacon bits added to the final product, a little bit of the leftover bacon grease is used to fry the jalapeño and green onion.

For the past seven years or so, we’ve been living in the south of the US. Over time, we’ve learned about the cuisine and southern staples– whether that’s sweet tea, biscuits, fried okra , or casseroles

As you may know, one of these iconic southern staples are grits. While you might be most familiar with the famous shrimp and grits, grits work their way into many other recipes. Grits are even a popular breakfast food, functioning similarly to oatmeal.

In making this recipe, I wanted to combine some of my favorite foods to make a southern-inspired crowdpleaser. The end results are to-die-for cheesy, gooey grits filled with bacon bits, green onions, and jalapeños that will even satisfy the pickiest eater.

As some of you may have noticed, we’re huge fans of using jalapeños in our cooking. You’ll find an almost absurd number of jalapeño recipes on our blog. 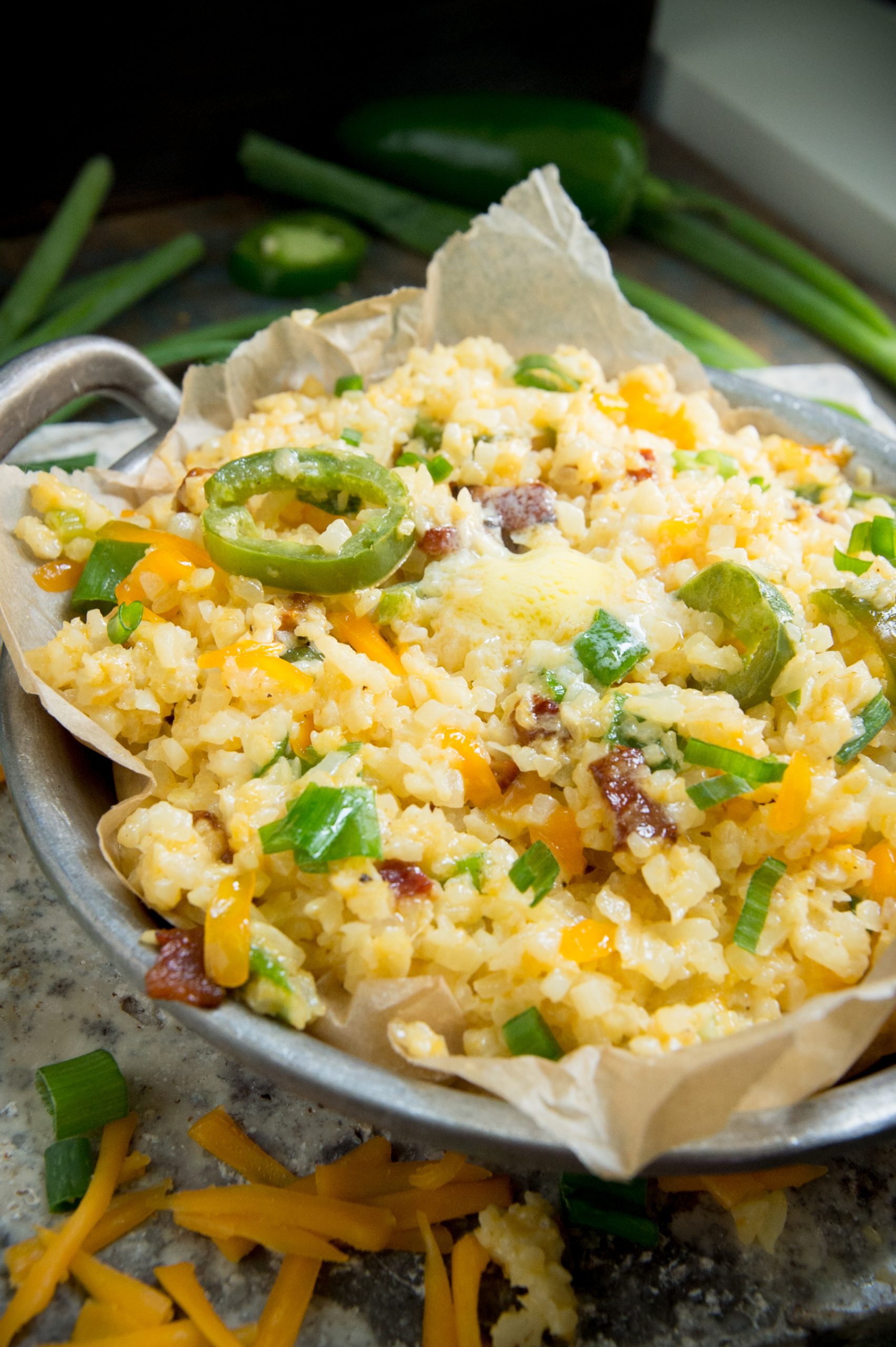 Can this recipe be made vegetarian?

Yes! While the original recipe includes bacon, this recipe can easily be adjusted to be vegetarian-friendly. Simply omit the first step of cooking the bacon. Then, when cooking the jalapeño and green onion, add a small amount of avocado oil or another oil of choice instead of the bacon grease.

Unfortunately, traditional grits aren’t keto-friendly or low-carb. Grits are made from corn which is quite high in carbs. A 1 cup serving of grits contains 31 grams of carbs.

Even though traditional grits might not be accessible, there are plenty of low-carb substitutes that can satisfy those grits cravings. This keto-friendly grits recipe uses cauliflower rice as a substitute for grits. For those skeptical of cauliflower rice, don’t be afraid to give this recipe a shot!

In this grits recipe, the cauliflower rice simply serves as a blank canvas. This recipe is packed with so much flavor that you’ll barely notice that it’s made with cauliflower. It definitely doesn’t taste low carb! 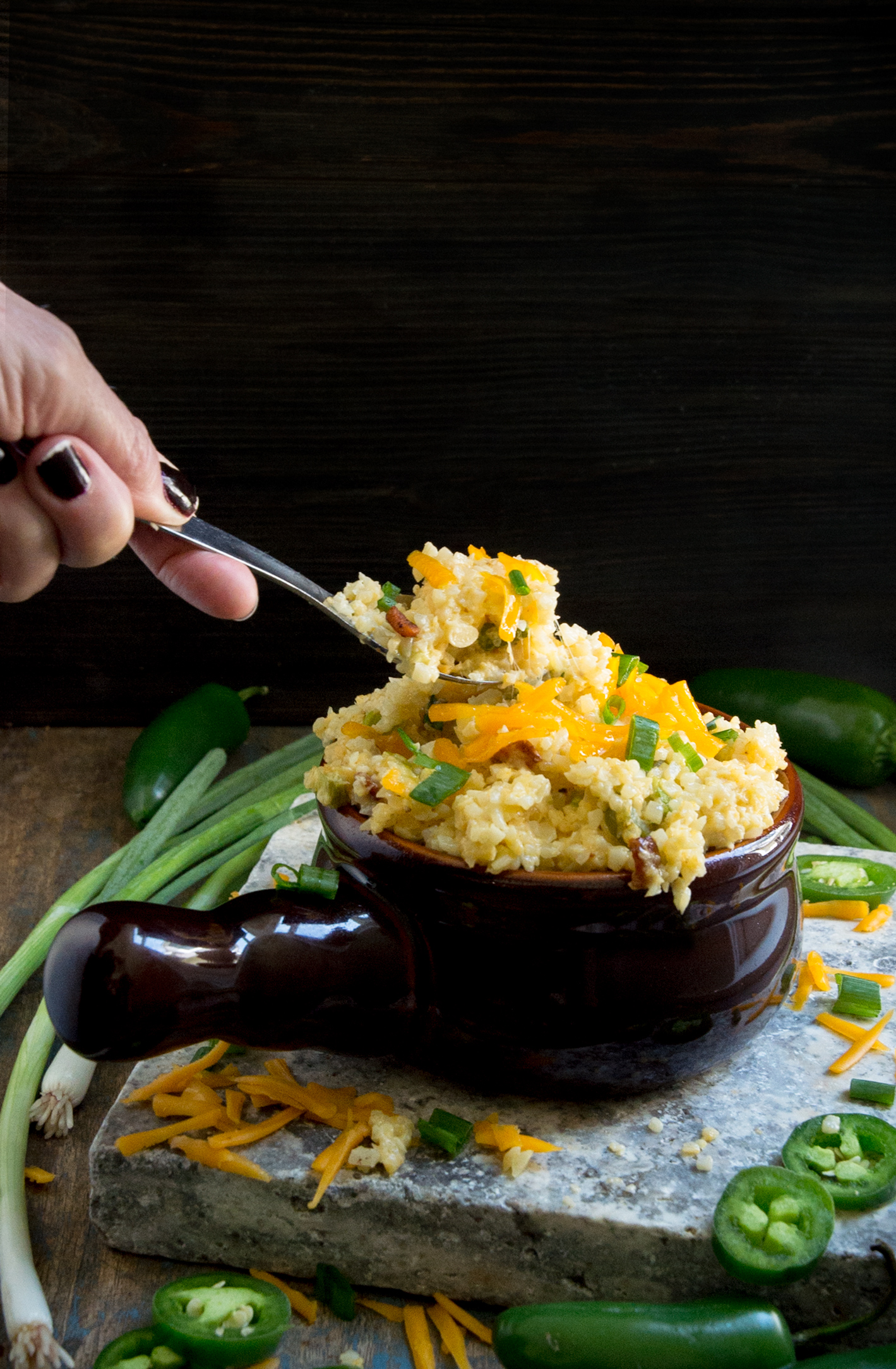 The key to making delicious and gooey low-carb grits is making and adding everything in the correct order.

For this recipe, the first step in cooking the bacon by itself. When bacon cooks, it releases a lot of grease. So when adding bacon to most recipes, it needs to be cooked on its own first so that the grease can be poured out before adding any other ingredients.

The other benefit of cooking the bacon first is that we can save just a little bit of grease for frying the jalapeño and green onion. This little bit of bacon grease will actually add a tremendous amount of flavor to this dish.

After frying the jalapeño and green onion until slightly golden, the next step is to add the cauliflower rice and cook until tender. In order to preserve the nutritional value of the cauliflower, it’s important to not overcook it.

To add the cheesiness to this recipe, add the heavy cream and cook, while stirring, until it barely reaches a simmer. Next, add the shredded cheese. 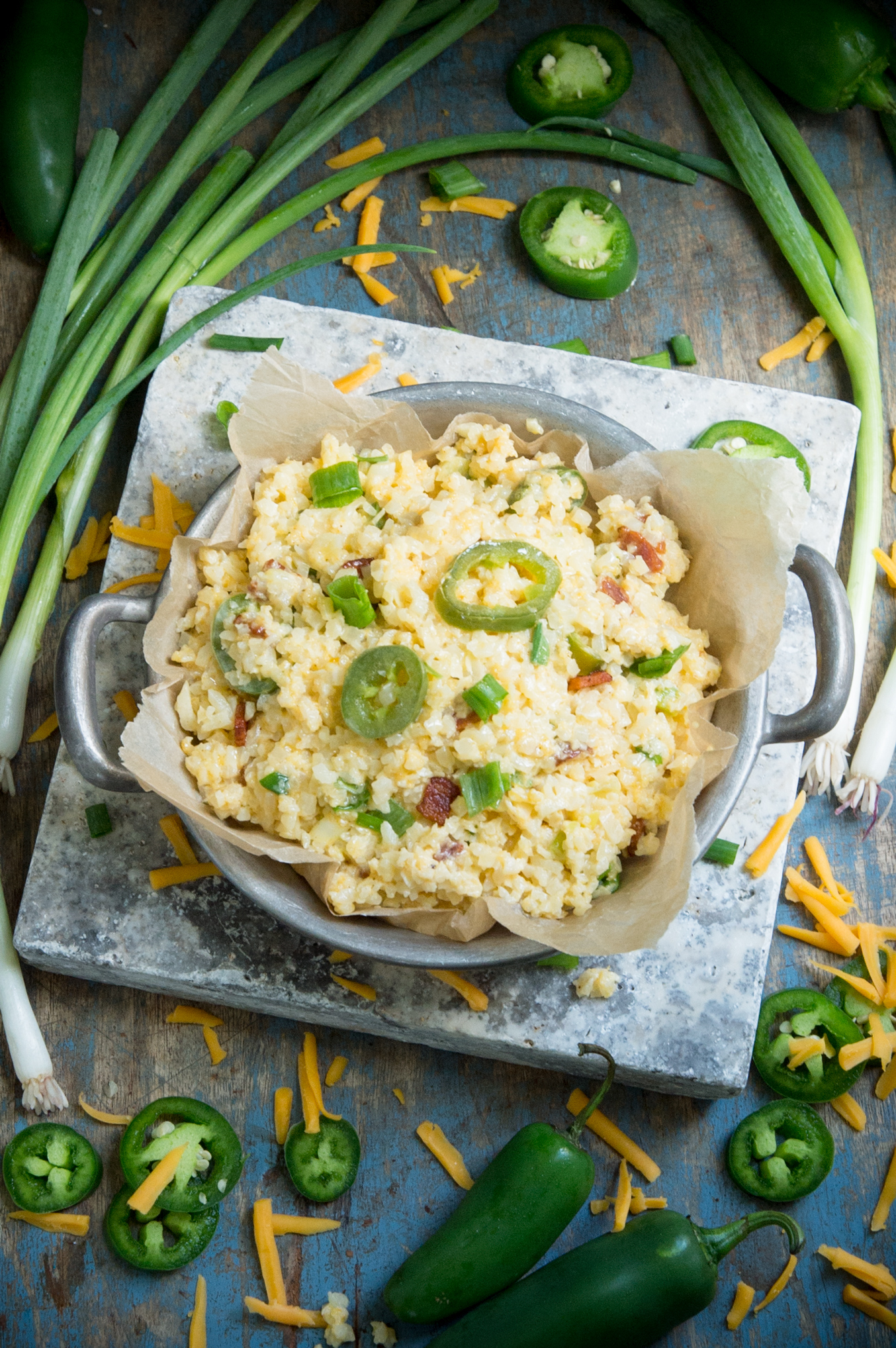 Can cheesy jalapeño grits be made ahead?

Yes! In fact, almost every time that I made this, I ended up storing some in the fridge for later. When making these grits ahead, simply store it the fridge in an airtight container and reheat before serving.

You may find that the grits become thicker after sitting in the fridge. This is mostly due to the cheese solidifying in the fridge. Once heated back up, the grits with become much softer. I also like to add just a little water or cream when reheating it to bring it back to its original form.

If possible, I recommend reheating it on the stove rather than in the oven or microwave. It will reheat more evenly and you’ll be able to stir in a little cream/water to restore its original texture.

Looking for other ways to satisfy your grits cravings? Try your hand at a southern classic with our Low Carb Shrimp and Grits recipe. 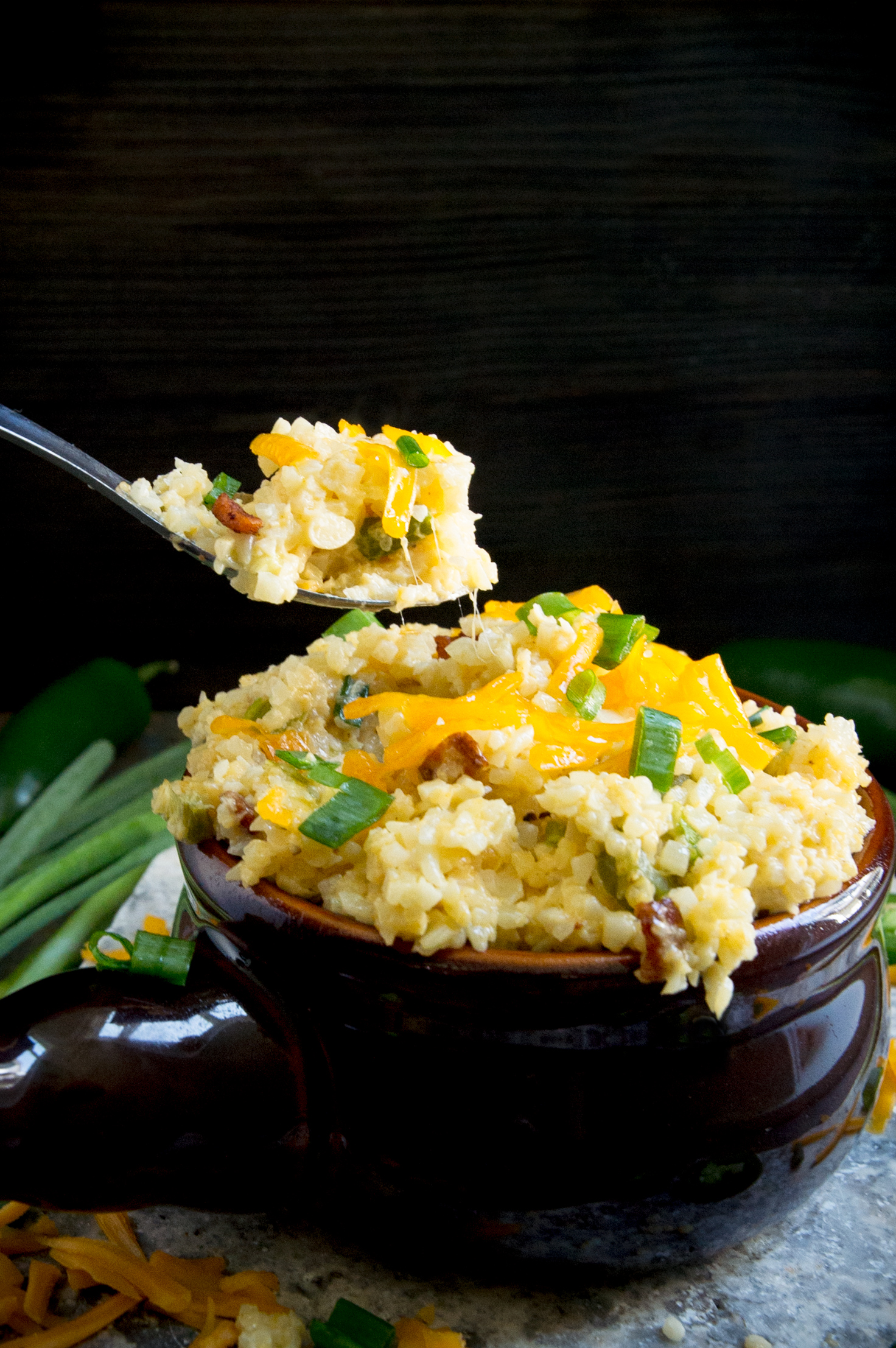 What to serve with Cheesy Jalapeño Bacon Grits

These Keto Cheesy Jalapeño Bacon Grits pair well with almost any southern-inspired main course. These grits also pair particularly well with barbecue so be sure to check out this recipe from Wholesome Yum to make your own low-carb barbecue sauce at home.

This recipe would also go well with any low-carb fried or crispy chicken like our Low-Carb Taco Crusted Cheese Stuffed Chicken Breasts or our Keto Buffalo Chicken Tenders recipe. 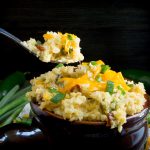