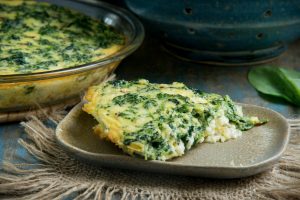 This Crustless Spinach Quiche recipe uses feta cheese and is reminiscent of the flavors in Spanakopita. This easy quiche doesn’t have a crust and is naturally low-carb, gluten-free, diabetic, Atkins and keto-friendly. 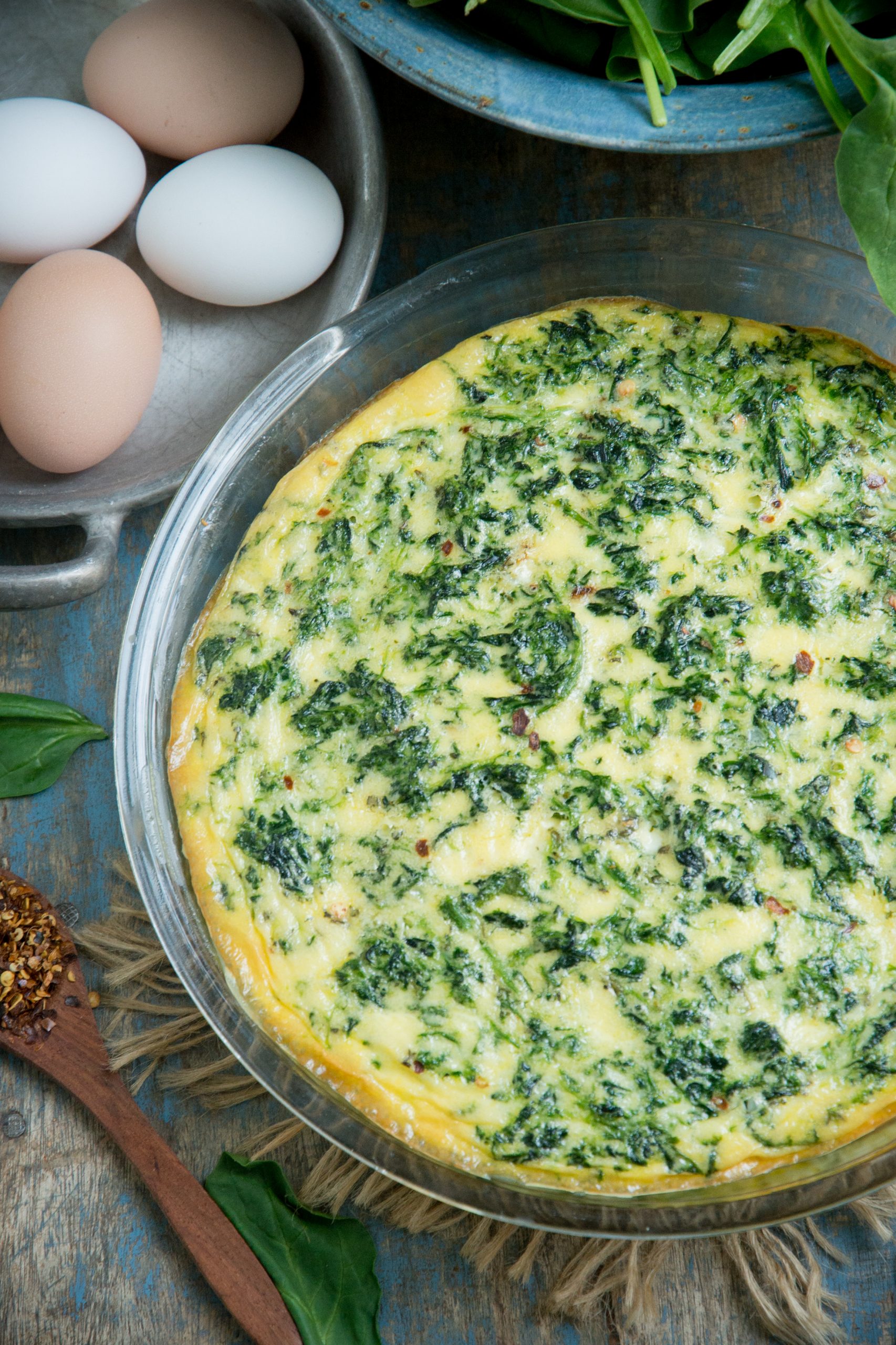 One thing I love about a crustless quiche is how easy they are to prepare! Let’s face it, making a crust takes time and energy. Ditching the crust not only makes this quiche easy to make, it also cuts out a lot of carbs. Don’t worry, though. This crust is still loaded with flavor!

The spinach and feta are a classic flavor combination. I blend in some notes of onion, garlic, oregano, and just a touch of red pepper flakes. The red pepper flakes don’t make it hot and spicy, but just add some interest to the flavor profile.

The heavy cream I use in this recipe adds to the richness in flavor and texture.

There are a lot of variations of spinach quiche out there! Recipes use lots of different cheeses and herbs.

I wanted to create the best crustless spinach quiche I could, so I considered the options seriously. I finally decided on using the traditional flavors of Spanakopita in this recipe. 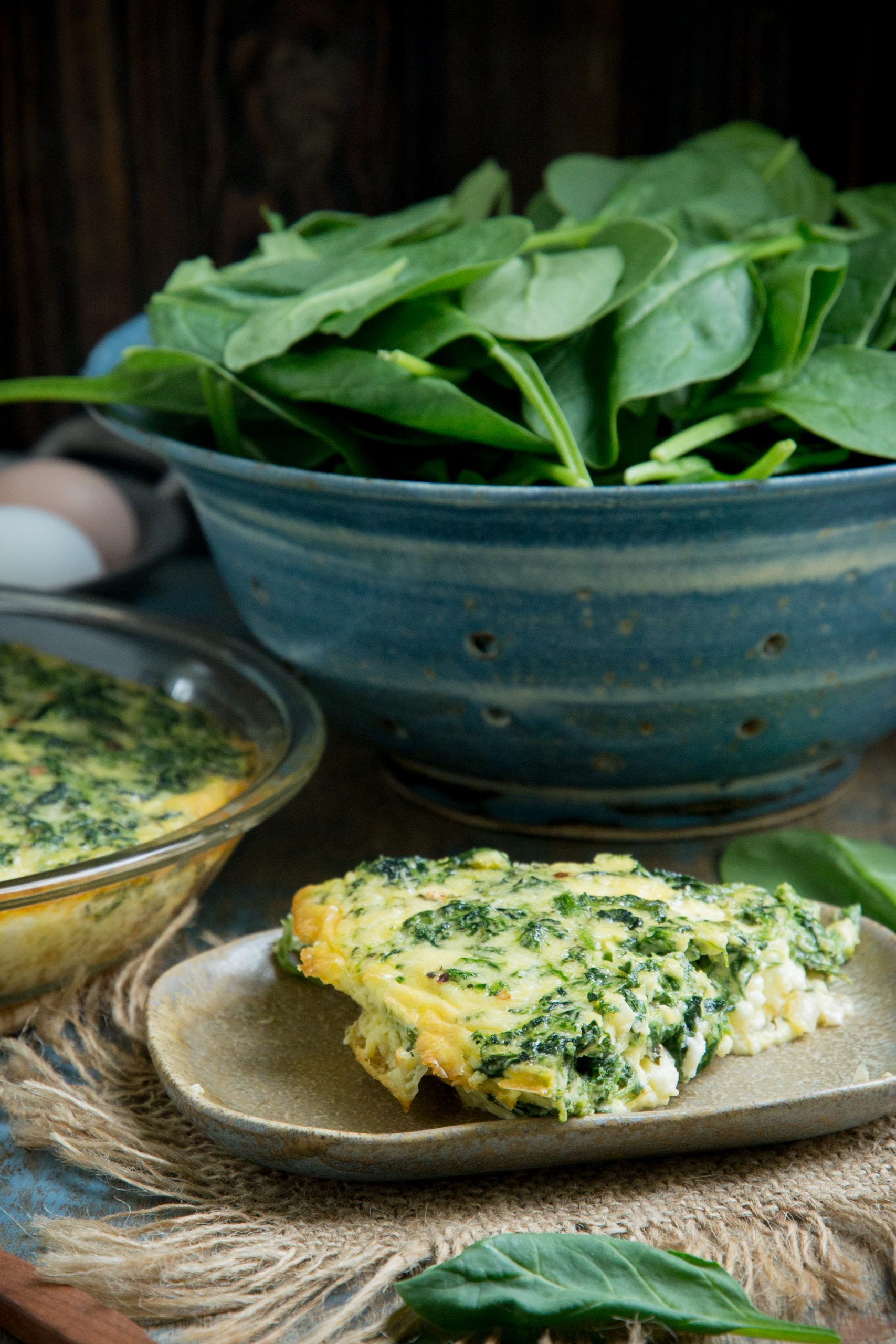 Disclaimer: We are partnered with Amazon and a few other companies. Some of the links on this site are affiliate links. This means we make a small commission from any sales to help keep the recipes coming! You pay the same amount (or less) when using these links. Thank you for your support!

How to make a crustless quiche

In a lot of ways, a crustless quiche is faster and easier to make than one with a crust. After all, there is no crust to make and no crust to bake. There is also no waiting time while the crust cools!

To make a crustless quiche, be sure to preheat the oven to the correct temperature–325º F for this crustless spinach quiche. I always start the oven before I do anything else so it has plenty of time to get hot. I also butter a glass pie dish, so it’s ready when I need it.

When making a quiche, it is important to start with pre-cooked ingredients. When veggies cook, the release a lot of water. If they cook in the quiche, the released water will make a watery, unappetizing quiche.

You don’t need to worry about cooking the frozen spinach as it has been gently cooked before it was frozen. You do, however, need to squeeze any additional water from the spinach (see the section below on how to do this).

To make a crustless quiche, you will simply layer the fillings in a pie plate. Next, whisk together the eggs and cream and any herbs or seasonings in the recipe.

The final step is to bake the quiche to perfection in the preheated oven.

How long to cook a crustless quiche

How long you cook a crustless quiche depends on a lot of factors. These factors include the type of baking dish, the temperature of the oven, and even your altitude.

I use a temperature of 325º F to bake this quiche. This is a lower temperature than some recipes use. It may take longer at this temperature, but it is easier to completely cook the center of the quiche  without overcooking or burning the edges.

The quiche is done when the center doesn’t jiggle when  you gently shake the baking dish a bit. I also like to allow it to start browning a bit on top. If you insert a knife into the center, it should come out clean.

This recipe takes 50-55 minutes to bake, but I start checking it at about 45 minutes. If you don’t have a glass baking dish and use a metal pan, you will need to check it even earlier than this. 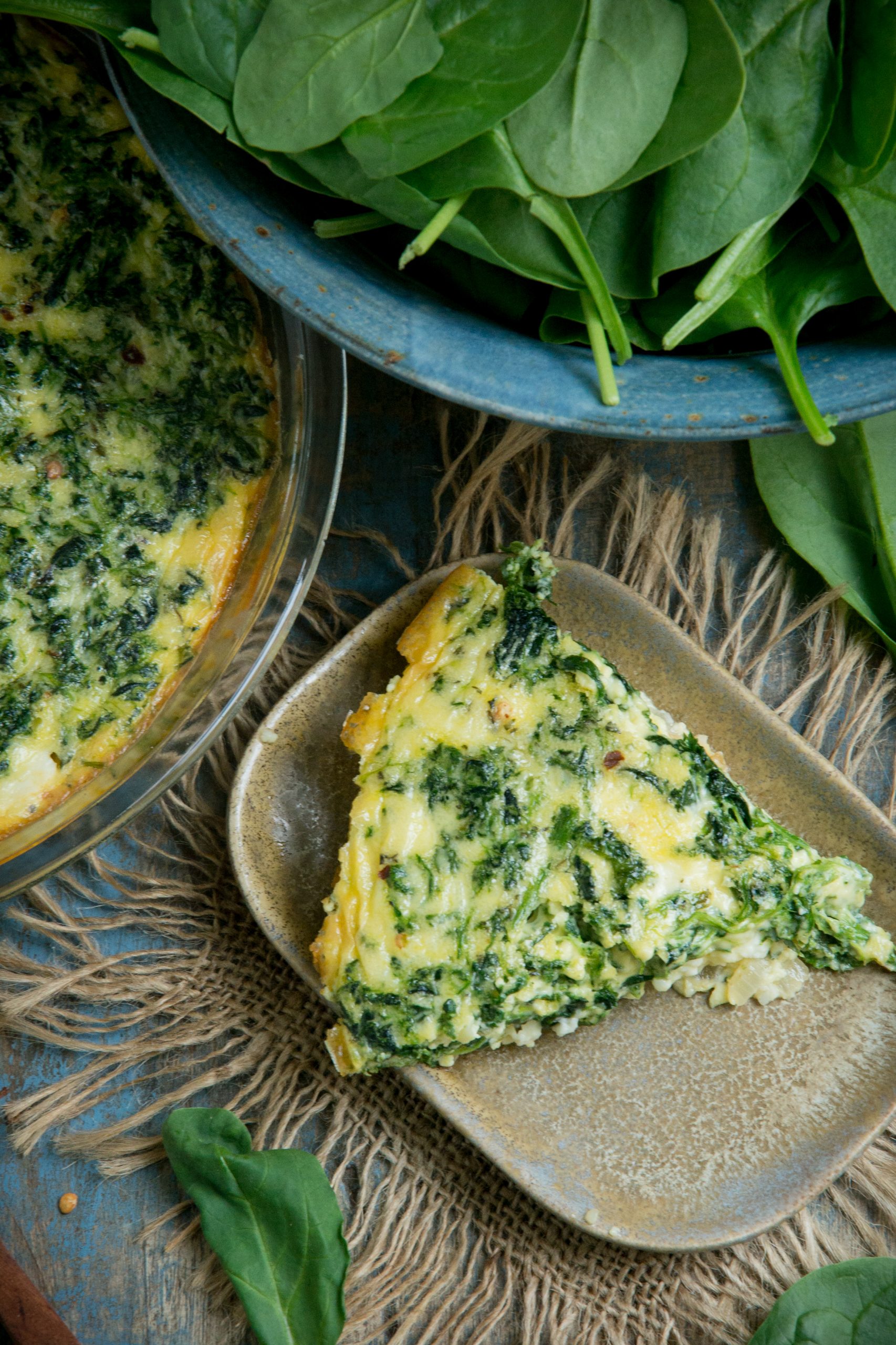 How to defrost spinach

For those of you who plan ahead, you can defrost spinach in the refrigerator overnight.

If you’re like me and don’t plan ahead, the refrigerator method won’t work. That doesn’t mean you need to wait to make the quiche. There are a few other ways to defrost spinach.

My favorite way is to put it in a colander and run warm water over it. It will defrost faster this way if you use your hands to break up the icy bits. Once it’s defrosted, you can immediately squeeze the water out (see the next section).

Some people choose to microwave the frozen spinach to soften it. To use this method, remove the spinach from the packaging and put it in a microwave-safe bowl. Microwave for 1 or 2 minutes or until defrosted.

How to squeeze the water out of the spinach

There are a few different methods to get excess water out of spinach and they both work well.

Some people wrap some cheesecloth or a towel around the spinach and squeeze to get the water out.

My favorite method is to hold the spinach over a colander and use my hands to squeeze it out.

With either method, it’s important to get as much water as possible out of the leaves. If you leave a lot of water in the spinach, it will result in a watery quiche. You need to squeeze and squeeze and squeeze some more. Squeeze until no more water comes out. 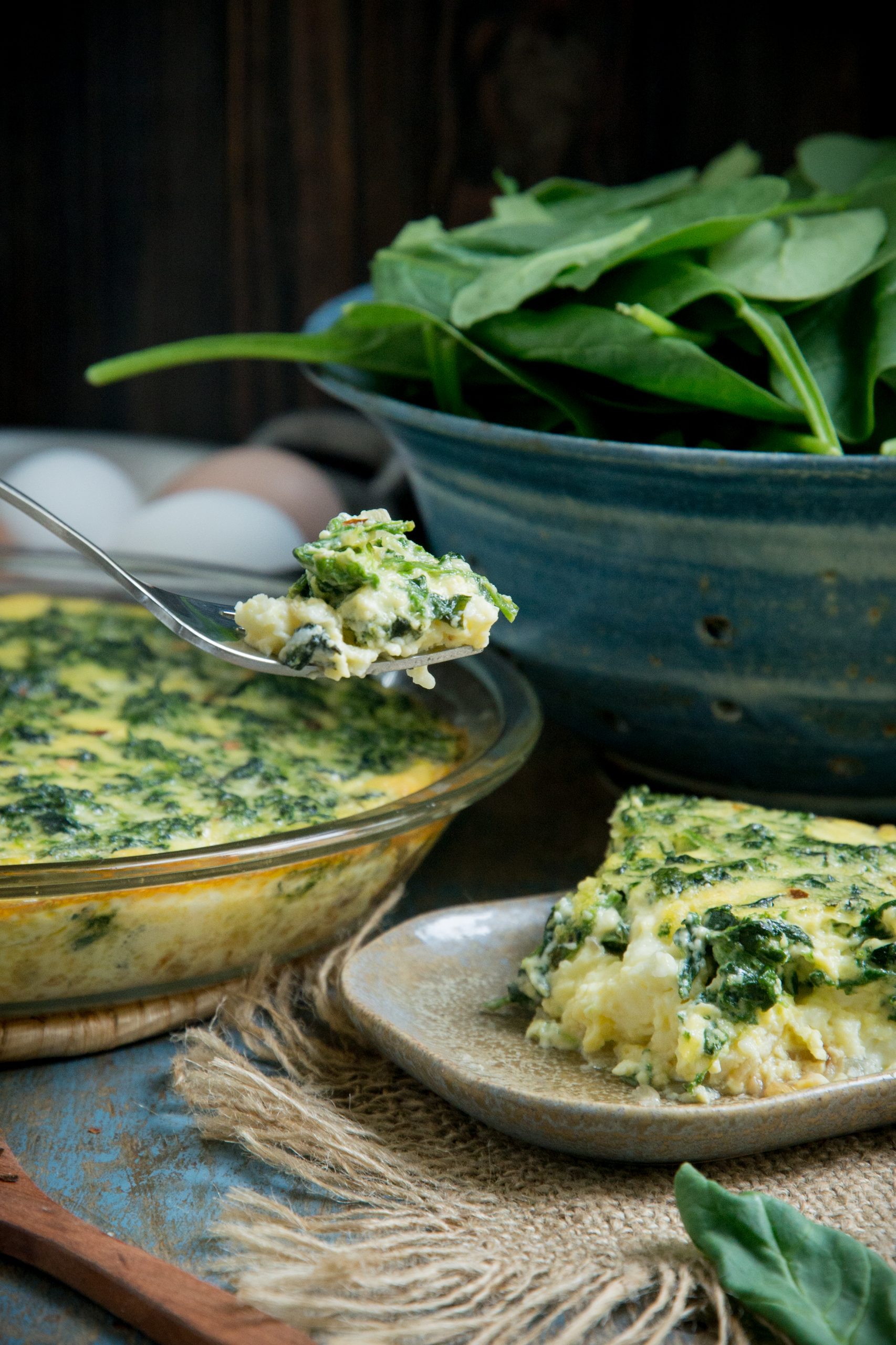 Can I use fresh spinach instead of frozen in quiche?

While I prefer to use defrosted frozen spinach in this recipe as it is less work, you can use fresh spinach instead of frozen in quiche.

The trick to using fresh spinach, is that you need to cook the spinach first. To cook the spinach, you can either steam it or cook it in butter (or oil of choice) in a skillet. You will want to make sure it’s completely cooked and not just wilted as you need all of the water to release.

After cooking the spinach, let it cool, then drain it and squeeze out the water as you would the defrosted frozen spinach.

Can I use milk in quiche instead of cream?

I love using cream in quiche because it makes the final product richer. If you really don’t want to use heavy cream, you could use half and half.

You can get away with using whole milk, but the lower the fat content of the milk, the more watery the quiche will be. 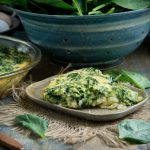 This Crustless Spinach Quiche recipe uses feta cheese and is reminiscent of the flavors in Spanakopita. This easy quiche doesn't have a crust and is naturally low-carb, gluten-free, diabetic, Atkins and keto-friendly.