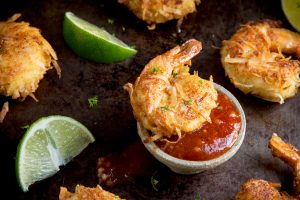 This Keto Coconut Shrimp Recipe makes crunchy and flavorful coconut shrimp that your whole family will love. This recipe also includes what we think is the best low-carb sweet and spicy dipping sauce for coconut shrimp. This recipe is suitable for those following a low-carb, Keto, gluten-free, Atkins, or Banting diet. 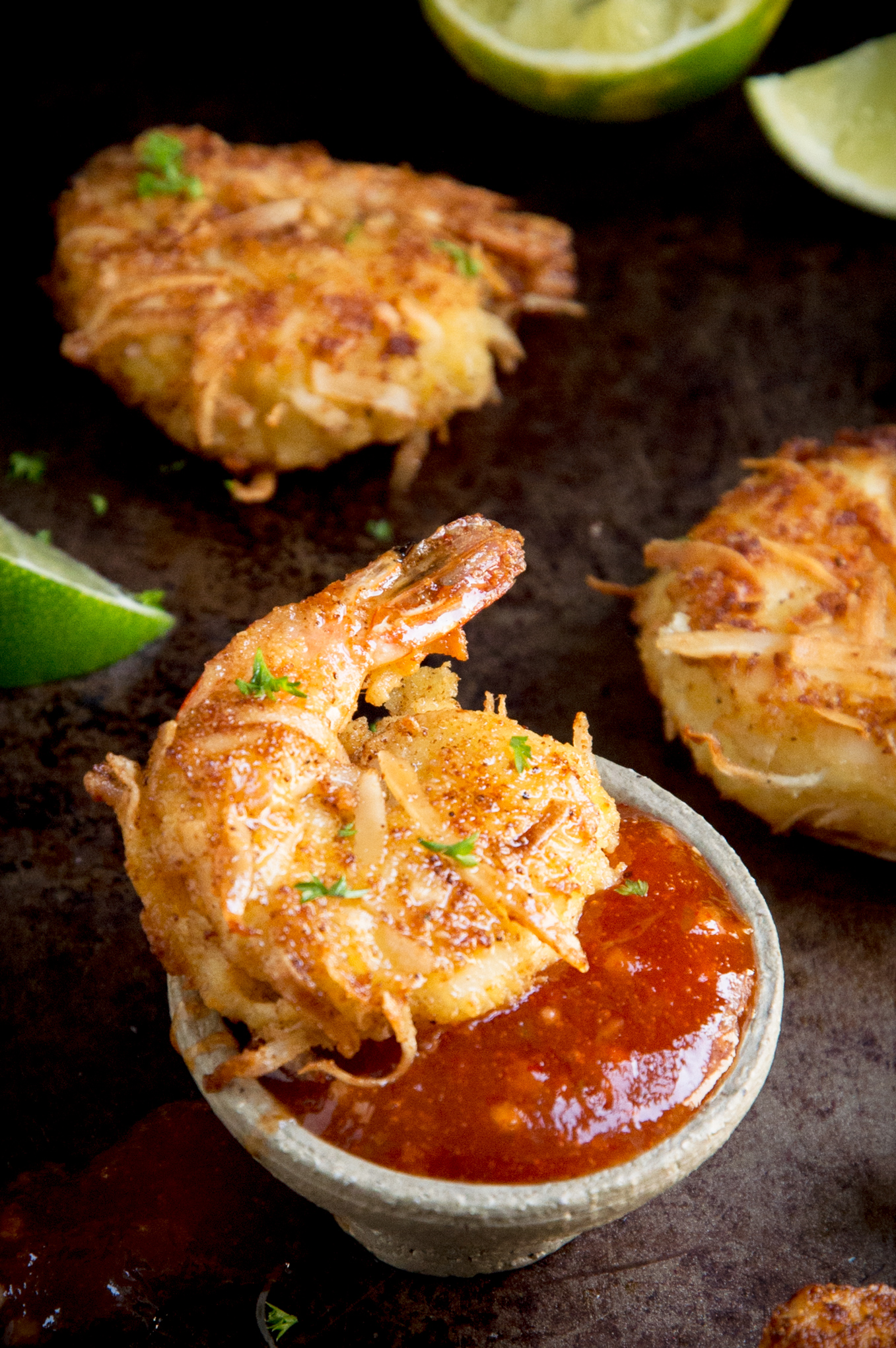 The flavor of these Keto Coconut Shrimp will transport you straight to the tropics. The light sweetness of the coconut with the keto-friendly sweet chili dipping sauce pair together perfectly to create the ideal summer dish.

This recipe is an easy way to get out of the rut of typical weekday meals and learn a new way of prepare shrimp while staying low-carb. It’s also the ultimate family-friendly low-carb dish that will keep kids coming back for seconds.

The inspiration for keto coconut shrimp

Funny enough, despite how many times I’ve made this recipe, I’ve actually never made traditional higher-carb coconut shrimp at home.  Although it took a few tries to get the proportions of this recipe just right, my whole family always looked forward to those coconut shrimp recipe testing days. 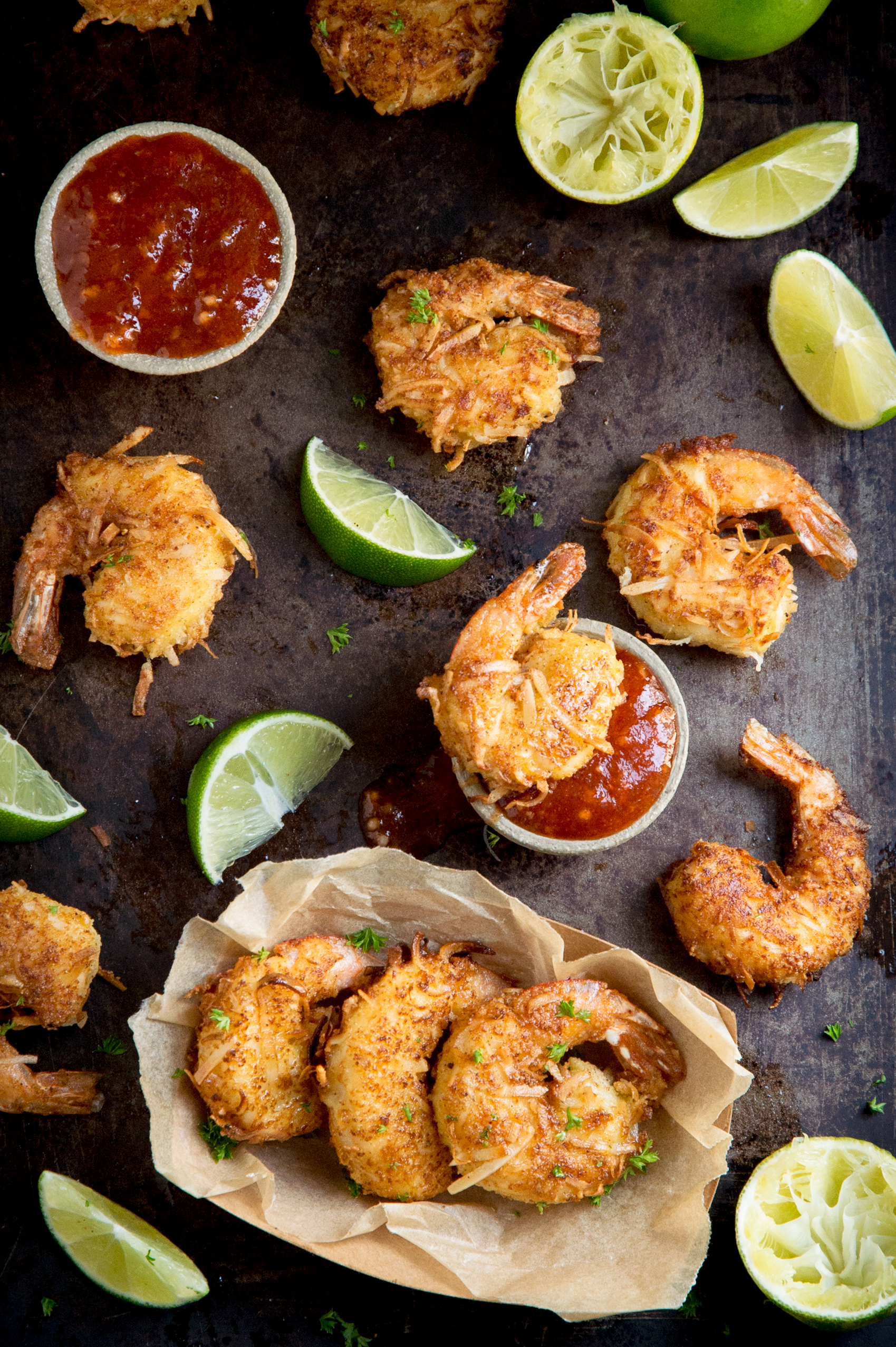 Can you have coconut on keto?

Yes! Although coconut has a natural sweetness to it, it also contains a large amount of fiber which can be subtracted from the total carb count in order to calculate the total net carbs.

For example, 1 cup of unsweetened shredded coconut contains 16 grams of carbs and 12 grams of fiber. This equals out to only 4 net carbs for a whole cup of coconut.

It’s also helpful to keep the sugar content of shredded coconut in mind when eating out. A lot of sweets that include coconut or even coconut shrimp, a savory dish, are typically made using sweetened coconut.

How to make Keto Coconut Shrimp

First, you need create three separate bowls for the breading process. The first bowl includes a mixture of almond flour and seasoning. This includes salt, pepper, garlic powder, and onion powder. A thin coating of this mixture helps provide just a little extra flavor that doesn’t overpower the coconut or dipping sauce.

The second bowl consists of beaten eggs.  The egg locks in the flavor from the first breading and it also helps the coconut mixture stick. The last bowl is filled with a coconut flake mixture with a small amount of almond flour and sweetener.

The breading process can get a little messy. Through trial and error, I’ve discovered a few tricks to make this process a little less messy. The most “life-changing” tip is to use the shrimp tails to hold onto while dipping the shrimp. This is especially important when dipping the shrimp into the egg mixture.

After dipping the shrimp into the egg, make sure there’s no excess egg attached. Any excess can make the final coconut mixture crumbly and eggy. If you notice this happening, you can separate the coconut mixture in half and set aside one half until you’ve used up the first half. This will prevent the entire mixture from becoming eggy and unusable.

While coconut shrimp can be baked or fried, we like to fry them for that extra crispiness. In this recipe, we use avocado oil for frying, but any high-temperature oil can be used. To conserve oil, we don’t use as much as someone might typically use for frying. About a 1 1/2 cm layer that covers the entire surface of the pan should be sufficient.

When frying the shrimp, be sure to leave room between each shrimp. I normally fry no more than five or six shrimp in the pan at one time. Also, check on them frequently as they can burn quickly if the oil becomes too hot. 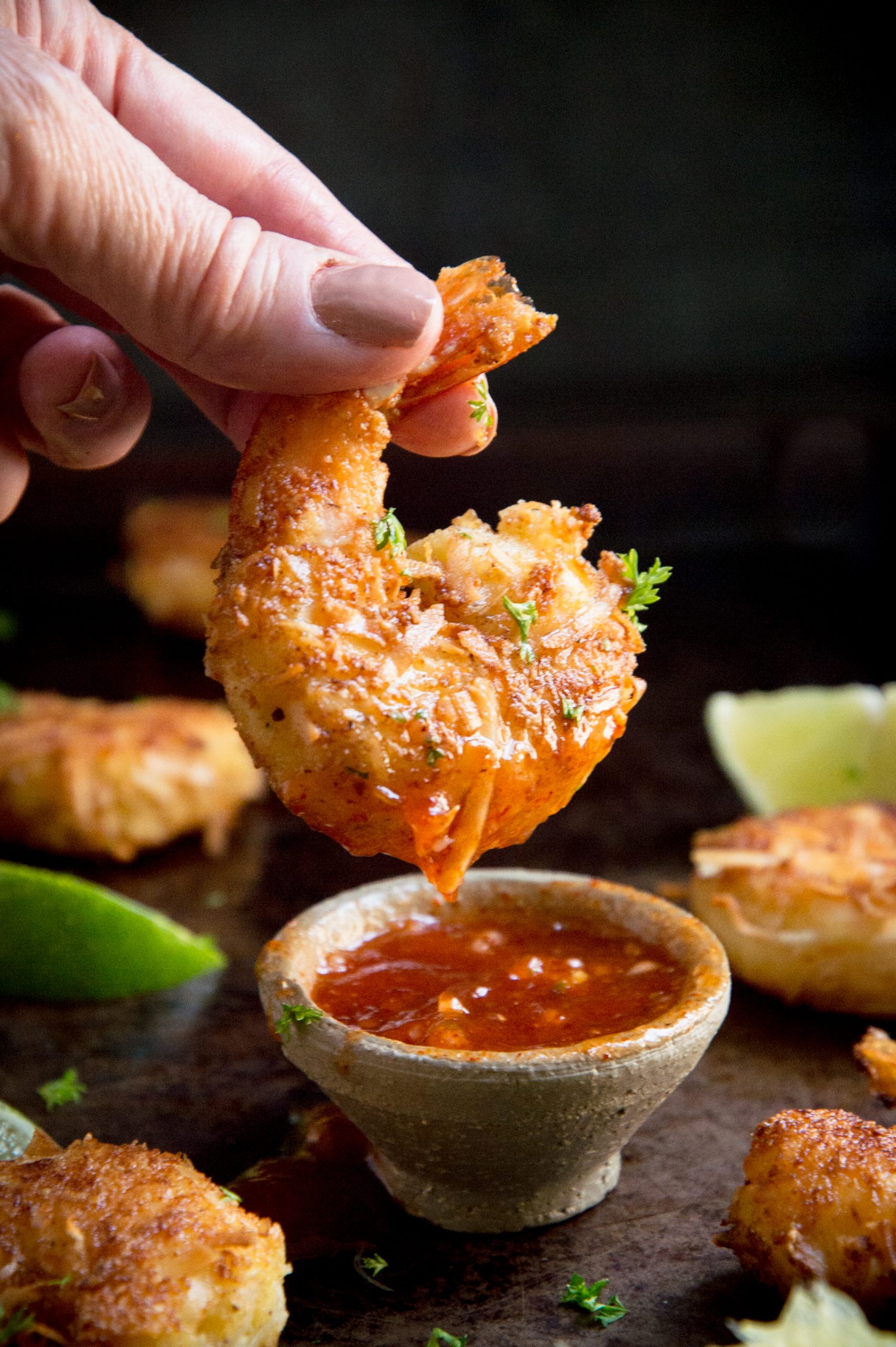 What kind of shrimp should I use to make coconut shrimp?

While most medium to extra-large shrimp would work to make coconut shrimp, the proportions of this recipe caters to jumbo shrimp. I tend to prefer using jumbo shrimp because it’s a good ratio of coconut breading and shrimp. The breading process also becomes a lot faster with jumbo shrimp.

When picking out shrimp to use for this recipe, be sure to select ones that are peeled and deveined with tails on. If you are using smaller shrimp, you may need to increase the amount of breading to cover all of the shrimp. Alternatively, you could decrease the quantity of shrimp.

When serving coconut shrimp, be sure to set a few slices of lime on the side. You can also garnish it with some finely chopped parsley.  I like to think of it as a tropical dish, so I like to pair these low-carb coconut shrimp with tropical fruity flavors. For example, you could pair them with this Tropical Slaw with Papaya Chia Dressing from I Breathe I’m Hungry. And of course, you can’t go wrong with pairing it with a good low-carb Piña Colada like this one from Tasty Low Carb or our Low-Carb Blackberry Mojito . 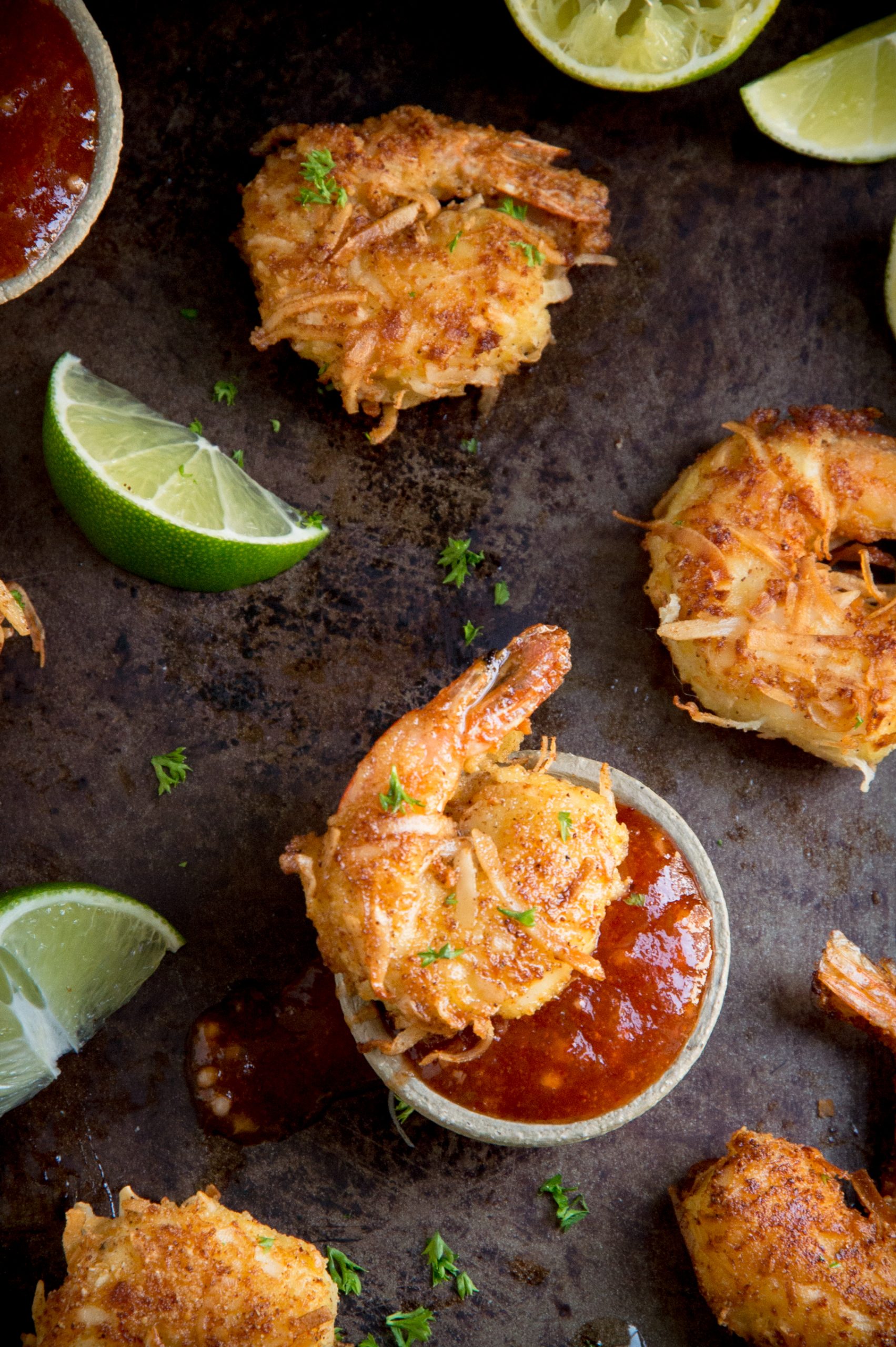 Most dipping sauces for coconut shrimp consist of a mixture of jam and sweet chili sauce. Unfortunately, both of those ingredients pile up the carbs really quickly. I spent a lot of time to wracking my head trying to think of replacements for this ingredients.

Mom and I finally decided that it would be easier and more accessible to make the whole sauce from scratch. Unlike specialized sugar-free jams or low-carb sauces, this dipping sauce uses simple ingredients that you probably have on hand. While it tastes just as good if not better than other dipping sauces, it’s at fraction of the carbs. On top of that, it’s so easy to make and so versatile!

This Keto Coconut Shrimp Recipe makes crunchy and flavorful coconut shrimp that your whole family will love. This recipe also includes what we think is the best low-carb sweet and spicy dipping sauce for coconut shrimp. This recipe is suitable for those following a low-carb, Keto, gluten-free, Atkins, or Banting diet.

These nutrition calculations are for 5 shrimp. This assumes there are 25 shrimp in a pound. The exact number of shrimp per serving may vary between 4-6 depending on the size of shrimp.

The nutrition calculations also count for 2 tablespoons of avocado oil for the entire recipe. More oil may be used in the process, but it will not all soak in the shrimp. 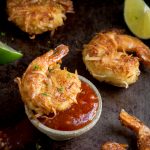 A sweet and spicy dipping sauce that pairs well with shrimp.

When reheating this sauce, whisk in 1-2 tbsp. water to restore its original consistency. Nutritional calculations are based on 1/5th of the recipe.