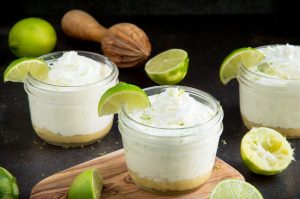 This recipe for Keto Key Lime Cheesecakes is a super easy low carb spin-off of the traditional key lime pie. This kid-friendly low-carb recipe includes a simple keto cheesecake crust and is filled with a heavenly and tangy key lime mousse. This recipe is suitable for those following low-carb, Keto, Atkins, Banting, and gluten-free diets. 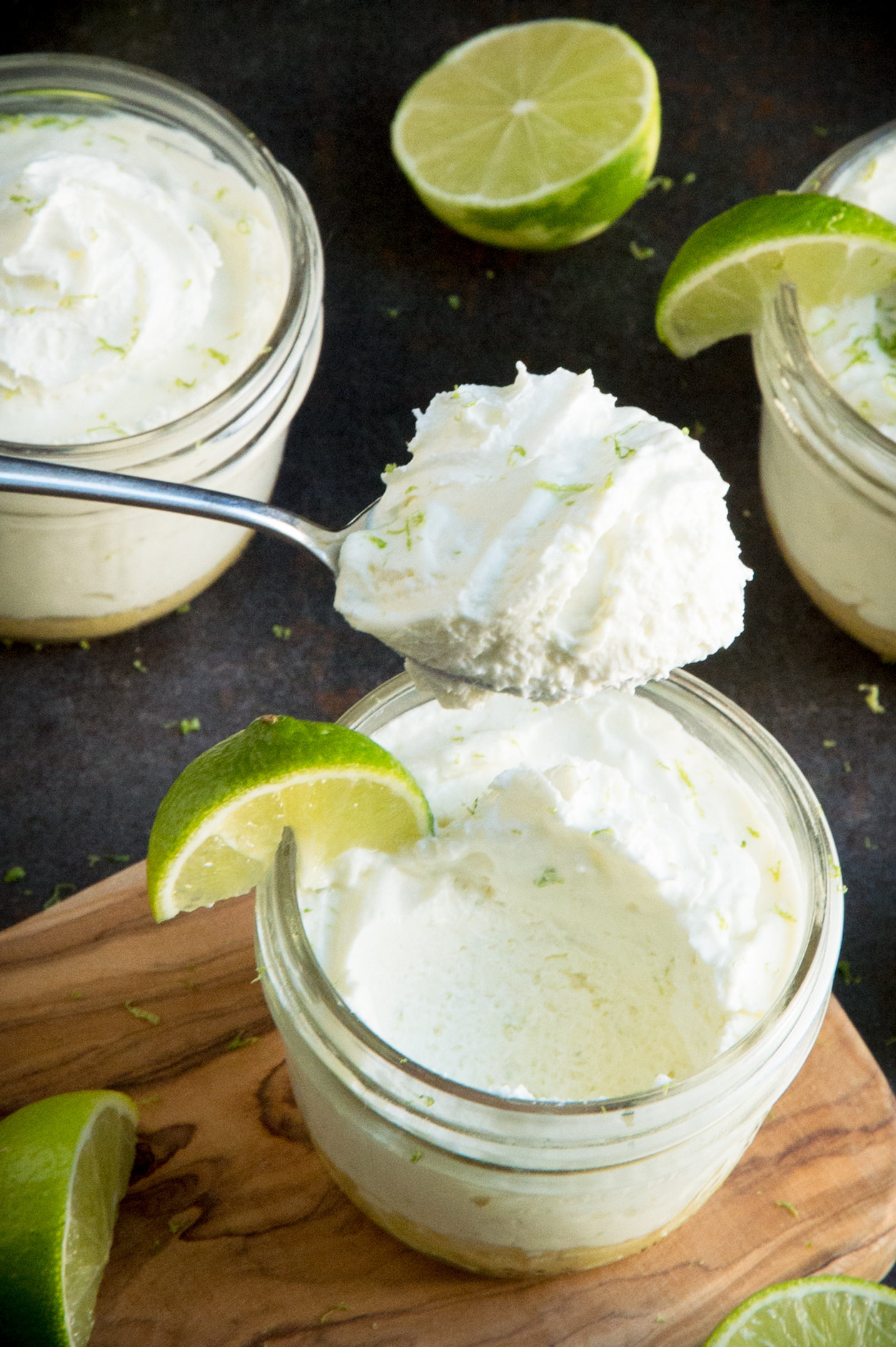 To make these cheesecakes even more elegant, you can even top it with a little whipped cream and a garnish with a slice of lime!

As the weather keeps heating up more and more every day here in the south, I’ve been focusing on making more refreshing summer treats. I’ve always found the key lime pie to be the epitome of a summer dessert. It’s cool and refreshing with a punch of tangy lime flavor. Although we’ve already created a keto-friendly key lime pie several years ago, I wanted to try my hand at creating an even simpler spin off.

Let’s be real. Sometimes we all just want an amazing low-carb dessert without all the work that it takes to make it. This recipe combines all the taste and flavor of the delicious key lime pie in even less time and effort. Plus this filling is so flavorful, it might just be the best low-carb key lime pie filling you’ve ever tasted.

This simple key lime cheesecake recipe is ridiculously easy to make. The whole recipe takes 20 minutes max to pull together. The fridge will do the rest of the work. Trust me, your friends and family members are going to be impressed! These keto-friendly key lime cheesecakes definitely don’t taste low-carb.

Another handy perk about this mini key lime cheesecakes is that they’re super portable. I love making these in mini wide-mouth mason jars. Not only do the mason jars make for a fun presentation, they also come in handy if you want to bring them along on a picnic. These can also be made in ramekins or other small oven-safe dishes. 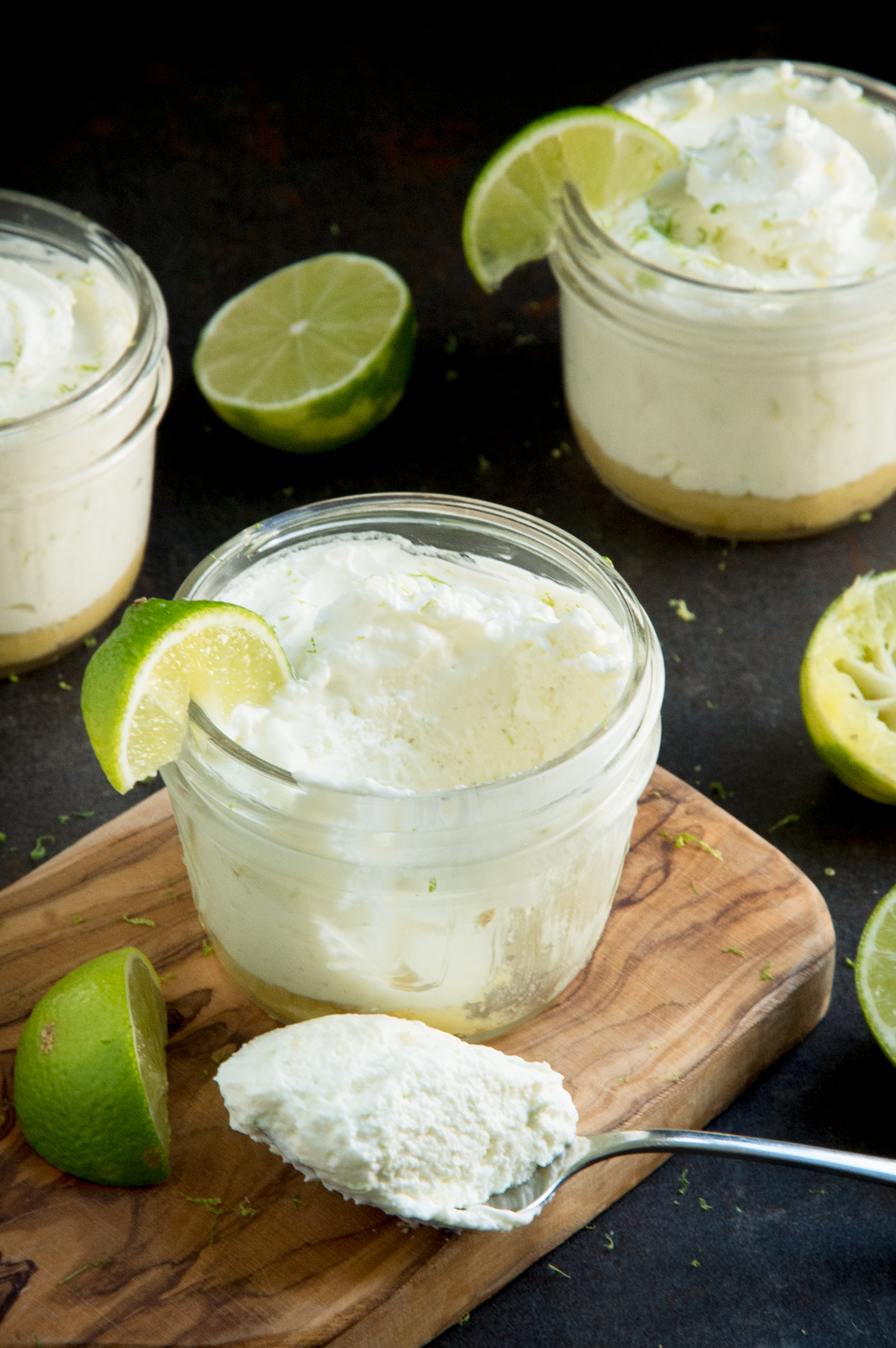 Disclaimer: Some of the links on this site are affiliate links which means we make a small commission from any sales to help keep the recipes coming! You do not pay any more. Thank you for your support!

What is the difference between regular limes and key limes?

The biggest difference between these two limes when used for cooking is the amount of tartness. Key limes are grown in the the Florida keys and tend to be smaller in size with thinner, slightly yellowish skin .

The most common variety of limes in grocery stores are Persian limes which are bigger and have a thicker skin. Key limes tend to be less tart while regular (Persian) limes are more tart and acidic. To be honest, I personally don’t mind that extra tartness of regular limes. If you want to cut the tartness a little more, you can add a little extra sweetener.

Can you substitute regular limes in this recipe?

Yes! Don’t worry if you don’t have any key limes on hand. Not all stores carry key limes and they may be harder to find in certain areas and grocery stores.

I’ve made this recipe many times using just regular limes. The difference in taste is very minimal, so they’ll still offer that key lime pie taste that we all love.

Thankfully, yes, as long as you consume it in moderation. A full 8-oz package of cream cheese contains about 16 grams of carbs.

On top of that, The neutral flavor of cream cheese works well as the foundation of sweet and savory recipes alike. This makes cream cheese the perfect base for low-carb and keto-friendly cheesecake fillings. It doesn’t just end there. Cream cheese is also commonly used to make frostings, fat bombs, or even mousses.

Yes! The juice of 1 lime contains about 4 grams of carbs. While the juice provides some of the flavor and tang to this recipe, it’s actual the lime zest that provides the bulk of the lime flavor in the cheesecake filling.

Lime zest typically contains about 1 gram of carbs and 1 gram of fiber per tsp. Since fiber can be subtracted from the total next carbs, lime zest is nearly a zero carb addition to this recipe. Even so, you’ll be surprised at just how much flavor it adds to these cheesecakes!

When are key limes in season?

Key limes from the Florida keys are typically in season in the summer months, around June-August. During this time period, it may be easier to find key limes in grocery stores. If you can’t find any locally, key limes can easily be substituted with regular limes! 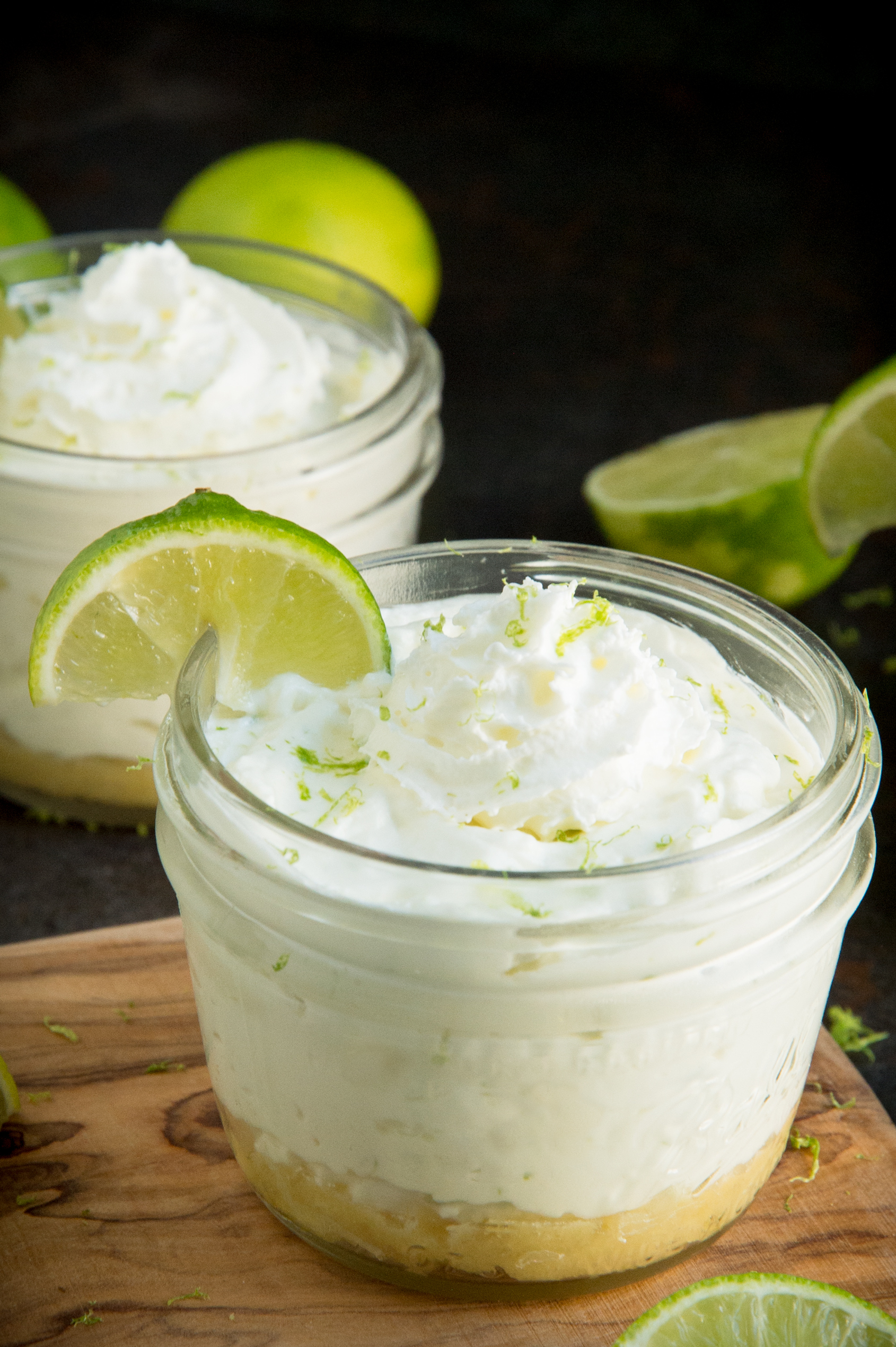 Have a few extra limes on hand? Or just love that zesty lime flavor? Here are a few additional easy low-carb and keto-friendly lime recipes. If you’re looking for a more savory recipe to use limes, try out our creamy cilantro lime dressing recipe. Be sure to try our low-carb strawberry lime cooler too. It’s another great way to cool off on a hot summer day!

If you’d like a more traditional low-carb version of key lime pie, you can visit our low-carb key lime pie recipe to make a full sized key lime pie. For a lime-inspired main course, visit noshtastic for this recipe for cilantro lime chicken. 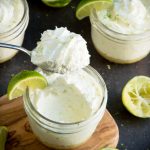 nutritional facts do not include the optional pinch of salt